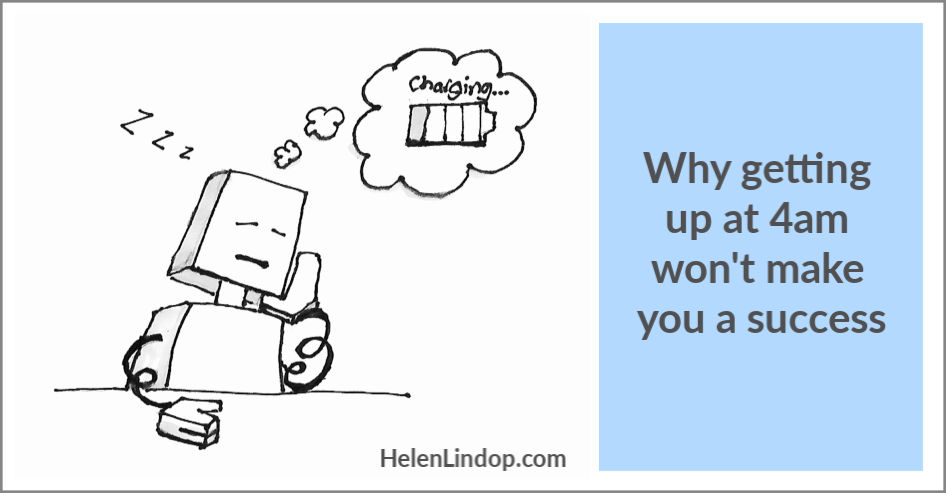 “Are you a failure? Try waking up earlier, slacker”.

That’s the first line from one of the gazillion posts you’ll find online about how successful people wake up at 4am. Last week Eliza Do Lots, who is one of our friends at Drive The Network , said she’d been part of a Facebook group where everyone was getting up at 4am with the intention of becoming a success. Guess what the results were? A lot of knackered people who felt like failures.

Being a bit of a geek I can give you a few good reasons why getting up at 4am won’t make you a success, and I’ll get to those in a minute. But underpinning all of these is this…

These are just a few examples, there are many more:

I freely admit most of these are a work in progress for me, too. They take years and they take constant testing and tweaking, setting goals, writing plans and implementation. It’s hard, sometimes frustrating work. But being part of Drive The Network helps a lot.

In contrast, getting up at 4am is a simple message and a far easier sell for some motivational speakers. But it doesn’t work for most of us and here’s why…

It’s twisting cause and effect around in a way that’s just silly if you think about it. Even if successful people do get up at 4am, copying their habits won’t by itself make you successful. Just like dancing for eight hours a day won’t make me a professional ballet dancer, even if that’s what professional ballet dancers do. After all, I’m in my 40s and built more like a rugby player than a dancer. Much better to decide what I want and plan how to get there in a way that allows me to get enough sleep.

Ever seen one of those news local news stories where the reporter congratulates a 100 year old on surviving to such a ripe old age, then asks them their secret of long life? Then they reply ‘a glass of whisky a day and avoid women’! They have no real idea why they are still alive when everyone else isn’t, and why should they? It would be far more useful to do some research on what killed those people who didn’t make it to 100, so we’d all know what not to do.

It’s the same for successful people. True, they work hard, but no doubt so do a lot of ‘failures’. Do the successes really know why they won and the others didn’t? Probably not, which is why they say things like ‘I get up early’. Plus, it would be embarrassing for them to say something like ‘I worked hard for years but the real breakthrough was this amazing piece of luck…’

(If you’d like to know more about this, look up survivorship bias.)

The definition of success according to the cult of entrepreneurship is big money, expensive cars, working crazy hours and high pressure. It’s only one very narrow definition of success, and you can choose not to follow it. Also, there’s sometimes a hidden cost to this kind of success including damage to relationships and mental health issues. If we want to be happy, we need to choose our own definitions of success.

The moral of this story…

We need to build a solid foundation rather than pinning our success on some kind of hack that’s based on flimsy evidence. I know it’s incredibly tempting when things get hard to want some of the ‘entrepreneur dust’ to rub off onto us, but will that simple hack really work? Probably not.

Learn the trade, not the tricks of the trade…then pay someone else to do the trade for you! 😉

In my Free Business Toolkit I have much more advice on how you can save time on your sales and marketing using tech  Click here to sign up.

Update: Several people on Twitter have suggested that, according to the Philip K Dick book, an android should be dreaming of electric sheep. So I updated my drawing from the top of this post…