One day I opened an email and nearly fell off my chair with surprise.

“As founder of BritMums, Jen and I would like to extend an invitation for you to speak at the BritMums Live conference on 21/22 June in London. It’s the largest gathering in the UK of its kind, we are already sold out and will have 550+ delegates this year. You can check out the agenda, speakers this year include Katie Piper, Kirsty Allsopp, Emma Freud, Katy Hill. In total there are about 80 speakers.”

It was from Susannah Scott, co-founder of BritMums. 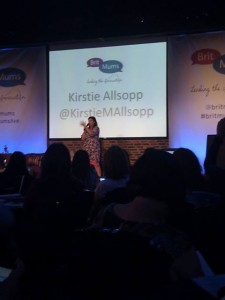 I was surprised partly because I’m not very involved with the parent blogging scene so I didn’t realise I was on the radar of the organisers. But the other reason was good old fashioned “but I just sit here typing stuff into my computer, why would anyone be interested in what I have to say?”

Which is daft, because people do read what I have to say on Business Plus Baby every day. And on Facebook, Twitter and all the other places I go.

So I did it. I sat there on stage with three other bloggers and a mic and told the audience what I thought about making money from blogging.

And it was bloody brilliant. I loved it.

I was a bit nervous, but it was what they call ‘good stress’. That’s a thrilling burst of adrenaline rather than the kind of stress that makes you want to curl up and hyperventilate.

One of the other panel members, Julie Hall, recorded it all here if you’d like to take a look:

A couple of hours earlier Kirstie Allsopp had been standing on the very same stage. Kirsty has been on TV for a good few years, is hugely popular and a well-known figure in the UK. That got me thinking about fame and the barriers that separate people like me from people like Kirstie. Are they real or are they mainly in our own minds?

Kirsty talked about her life, and not just her life as a celeb either. She talked about being absolutely gutted when her dog died and the challenges of house training her new puppy. That the main reason she wears dresses that people love is because she doesn’t have time to match separates in the mornings and dresses are quicker. That she only gets her nails done because fingers look huge on HD TV and if they look a mess it’s distracting for viewers. And how she ran a service searching for property when she was discovered by Channel 4, so her TV shows were much the same as her previous job, except now she was doing it on TV.

She seemed like a normal, down-to-earth person who just got a call from Channel 4 one day.

Was it that simple? Probably not, after all Channel 4 wouldn’t have discovered her without good connections (one of her clients was a Guardian editor) and she wouldn’t have got far without talent.

But then again we can all network and we are all talented in our own ways.

What if there’s nothing magical about famous people? What if the barriers are in our own minds? What if the only barrier holding you back is the thought that you’re somehow not as good as they are?

The other speaker who fascinated me was Baroness Susan Greenfield. I’m totally in awe of women scientists, so to sit just a couple of metres from such a high profile professor was a big deal for me.

What will stay with me is her confidence, her sense of authority and her presence. You only had to look at her to see she would be in charge of any room she entered, just by her posture, tone of voice and intelligence.

She was witty, too. You don’t have to be serious all the time to be taken seriously.

Some of Susan Greenfield’s authority comes from who she is and what she’s achieved. But there’s no doubt in my mind that we can get further in life and business by projecting confidence and authority even if we’re complete unknowns. It’s the difference between trying to be accepted and behaving like you already deserve it. Not because of some ‘fake-it-‘til-you-make-it’ mind game, but because you genuinely do deserve it and you feel that deep down.

Too often women suffer from imposter syndrome, where we believe that we’ve only got where we are today because we are lucky. As soon as ‘they’ (whoever ‘they’ may be) realise the truth we’ll be kicked out of the door.

My tiny taste of fame at BritMums Live has made me think of just how damaging this constant putting ourselves down can be. And just what we could achieve of we chipped away at those barriers that only exist in our own minds.

How do you feel about becoming a bit famous? What difference would it make to you?

2 thoughts on “Fame, confidence and what I got up to at the weekend”